Here you will find helpful tips for your training at home. Tutorial 6: Endurance Training with the App Tutorial 7: Strength Training with the App 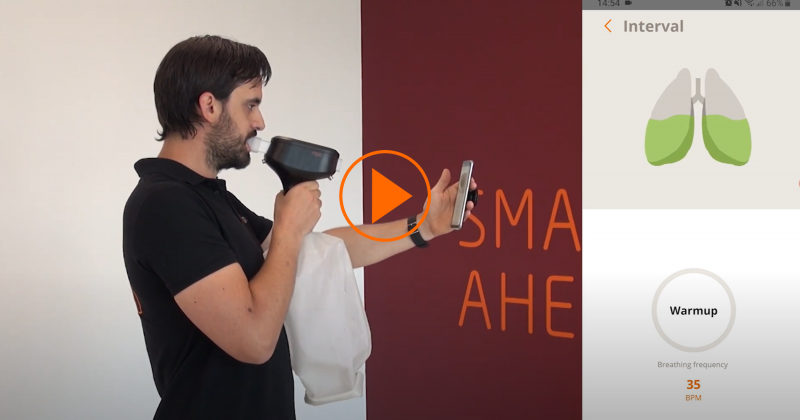 Guide to getting started
with Idiag P100 training.

For a quick start.

Do you need help with the Idiag P100 or would you like to receive specific training tips? Then make an appointment at one of our Idiag Center Respiration near you.

Can the IDIAG P100 be used by several people?

Yes, the IDIAG P100 can be used by several people. For this an additional personal user set is required, which contains the air guide, the breathing bag, the mouthpiece and a nose clip.
Personal user kits are not tied to a specific P100 hardware and thus allow the simple sharing of devices without neglecting hygiene aspects.

Where can I purchase the Idiag P100 and its equipment?

You can purchase the Idiag P100 and its equipemnt from our webshop at www.idiag.ch/en/shop.

What is the difference between the SpiroTiger and the Idiag P100?

The Idiag P100 is a development of the Idiag SpiroTiger and has
additional functions. In addition to endurance training, which was previously only possible with the Idiag SpiroTiger, strength training can now also be performed using the Idiag P100. Furthermore, training guidance is provided and documented via the associated app, allowing training progress to be visualised. Moreover, the app will in future also allow updates to be downloaded for the Idiag P100. These include further forms of training, breathing tests, etc.The integrated CO2 sensor is also new. Among others, this facilitates training not only in the seated position, but also under physical stress.

What benefits does the Idiag P100 app offer me?

Training using the Idiag P100 can be guided and documented via the app, allowing training progress to be visualised. Moreover, the app will in future also allow updates to be downloaded for Idiag P100. These include further forms of training, breathing tests, etc. Without the app training is only possible in “Free mode”..